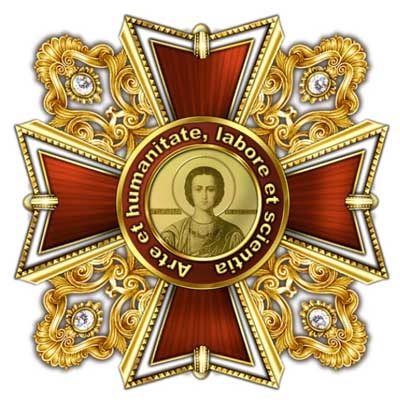 Award for professionalism and mercy «The Order of St. Panteleimon» is a public, professional-oriented and awarded for humanistic and noble activities in the field of health care, which positively affects the consciousness and spiritual development of the Ukrainian people and the state as a whole, is aimed at preservation and strengthening the health of Ukrainian citizens, brings tolerant attitude to each other and inspires new opportunities.

Award has a long history. In 2009, the Ministry of Health introduced the encouraging award "Cross Panteleimon the Healer" in Ukraine, which was awarded to those who have outstanding personal merits and contributes to the development of health and medical science in charitable, humanistic and social activities, and also for other achievements in the field of physical and spiritual health protection of the population. The award was agreed upon and blessed by each Primate of the three largest Christian Churches in Ukraine.

Since the foundation of the Award, there have been awarded more than twenty prominent scholars, doctors, public and charitable figures, representatives of the clergy, among whom such prominent personalities as M.M. Amosov (posthumously), O.О. Shalimov (posthumously), O.M. Lukyanova, Y.I. Kundiev, L.A. Pyrig, V.Y. Martiniuk, His Holiness, the Patriarch of Kiev and All Rus' - Ukraine Filaret, His Beatitude Vladimir, Metropolitan of Kiev and all Ukraine, Cardinal, Major Archbishop Emeritus of Kiev-Galicia His Eminent Beatitude Lubomyr Husar etc.

Following the fundamental principles of establishing the State Award in 2009 and continuing the tradition of rewarding, in order to restore the principles of mercy, humanism, love for the neighbor and the patient, in 2017 a Public Award for professionalism and mercy "The Order of St. Panteleimon" was launched.

On August 9, 2017, on the day of the Holy Martyr and Healer Panteleimon in Kiev, for the first time in Ukraine, celebrations were held on the occasion of the distinction of the best doctors of Ukraine and their rewarding with «The Order of St. Panteleimon».

For the first time in Sofia Cathedral there was an all-Ukrainian prayer service for doctors headed by His Holiness Patriarch Filaret in co-operation with representatives of Christian churches in Ukraine.This was the start of the tradition of awarding the best health workers annually.

The Award is awarded in the following 5 nominations:

- "For achievements in international cooperation in health care";

- "Exemplar of service to society".

In 2018, the Honorable Council introduced the new Award for Youth – the Medal of Saint Panteleimon.

- "For the care and kindness to the patient";

- "For scientific developments in medicine".

And in 2019, the Honorable Council introduced a new nomination for the “Order” for Foreigners:

- “For personal significant contribution to the development of the healthcare of Ukraine”.

The awards ceremony take place annually on August 9 on the Day of the Holy Martyr and Healer Panteleimon.